23rd March is celebrated as Martyr’s Day to remember the sacrifice of three extraordinary freedom fighters of India.,namely Bhagat Singh, Shivaram Rajguru, and Sukhdev Thapar . No doubt, they also sacrificed their lives for the welfare of our nation, whether or not they chose a different path.They are the source of inspiration for the youth of India. At such a young age, they came forward, and for independence, they fought with bravery. So, to pay homage to these three revolutionaries, Martyr’s Day is also observed on the 23rd of March. Little Flower School remembered these great heroes by feliciating the people who serve or has served in the Defence in Army, Navy and Air Force. Parents in service towards the nation were the guests for this programme. The objective was to make the students realize the true meaning of patriotism and sacrifice. The guests were honoured with the saplings and words of appreciation by the students through their speeches. They shared their views about the service for the nation and motherland, and guided the students to study hard and serve the nation in future. The programme concluded with singing of National song. 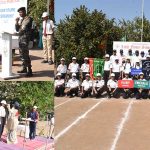 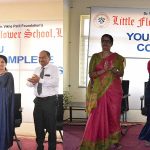