‘If your actions inspire others to dream more, lean more, do more and become more, then you are a leader.’

This momentous day of Investiture Ceremony dawned to bestow responsibilities on the deserving young talents of the school to lead their school from the front with their commitment, confidence and competence.

The school held the ceremony with great enthusiasm. It was the occasion where the young students were all prepared to don the mantle of leadership and discharge the responsibilities entrusted to them by the school. To inculcate the leadership qualities in students and to give them a feel of being an important and integral part of the administrative body, ‘Student Council’ is formed every year. The process was started right from the past week by contesting housewise elections.

The event began with a march by the newly elected prefects along with the House-Masters, Block Head and the Principal that embodied the contribution of school’s convention of delegating responsibility to the newly elected office bearers to spread the light of knowledge and pass on the rich legacy of values of Little Flower School  to their juniors. The function was presided over by the Principal.

The Principal and the guest of honours pinned the badges to the  House captains, Sports Captain, prefects and handed over the House flags to them. Then the Principal administered the oath to the newly elected ‘Prefectorial Body.’ The Principal congratulated the newly appointed Captains and prefects for their preparedness to take up responsibilities entrusted to them. The school Principal Mrs. Swati ma’am motivated them to do as they say and say what they do.The programme concluded with  the vote of thanks and singing of the School Anthem. 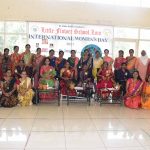 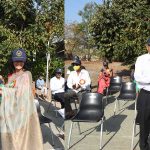